Yesterday our lovely equipment entact puppy, Tensaw, decided he wanted to go for a jog through the town of Hamilton. Luckily the security guards at the lab that I work at and live right next to know that these crazy huskies are my dogs. So, when one of the guards saw Tensaw running free he contacted me and I went on a chase about town and found him with a Good Samaritan who was checking his tags. When we got back home Saw got hooked up and has remained hooked up since. 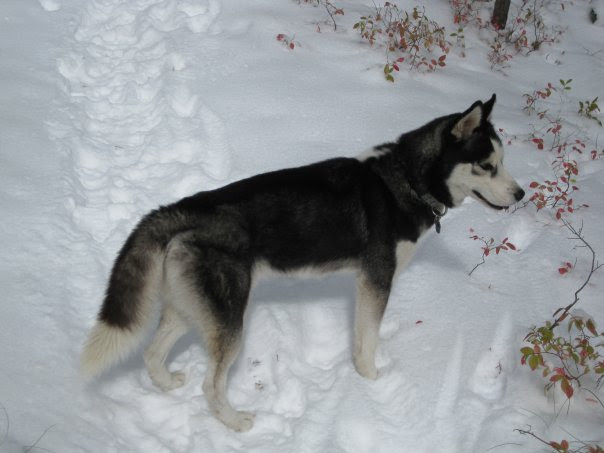 So when I came home for lunch today and heard this horrible racket in my backyard I thought, Tensaw must have gotten all tangled up in something. But I came to find how he'd esaped because just on the other side of one our gates sat Saw trying as he might to squeeze back into the yard.  Since he was still hooked up and couldn't just go run free, he was trying to erase the evil he had done. It was quite a humorous sight.

Morals of the story: That gate needs fixed. If you see an escaped husky grab it before it's miles away and find its owner. And even the best trained huskies will escape the yard and run (though I'm not claiming that Saw is, it's part of the breed and it happens to the best of 'em).
Posted by Cobey Williamson at 12:16 PM No comments:

This is a much belated blog about our second sled outing with our dogs which occured a few weeks ago. This sled trip was a little more of a fiasco than the first. Once again Nicki was kind to lend us a sled and a dog. At first she was going to give us two of her dogs but after a conversation with another musher we took a different pair. So we put Carmel and Cashew (the two from the other musher) in the lead, Tensaw (our pup) next in the traces, then Blue and Kona in the wheel. With me in the sled and Cobey driving the team we took off. Right off the bat, it was crazy and Carmel and Cashew obviously didn't want to lead with Tensaw the terror behind them. So Tensaw got a crack at the lead with Raven (Nicki's dog), who was just added to the team. In this case, Tensaw was only interested in Raven, and Carmel and Cashew just wanted to return to their team. After a few minutes of confusion and tangles, Cobey removed Carmel and Cashew from the traces and sent me off with Raven in the lead, Tensaw second in the traces and Kona and Blue at the wheel.

Things went well until we passed by a man with his small ankle biter dog (that I'm sure the Huskies thought was a cat). The dogs were doing well and ignoring it until Raven make a quick turn towards the dog. By the time I was off the sled and to her she had the dog by the throat and had picked it up off the ground. I got her to release it and it took off running down the trail (the man eventually caught his dog before the other two sled teams came up the trail). After that whole mess, I got the dogs lined out and we continued on. We probably made it about 2 -2.25 miles up the trail before I decided our dogs had had enough pulling (after all they are new to it and need to be conditioned to this type of running/work). The way back was all down hill and we passed by the man with his dog, whom I apologized to and who was very understanding of the whole ordeal. At one point during the run after we turned around and Nicki was still headed up the trail with her team, I switched Raven and Kona in the traces because Raven wasn't interested in leading. Kona did an amazing job! She is a REALLY hard worker, aims to please and does what she's asked...which I now realize makes her our best candidate for lead dog of the three. And after that day, I'd say she'd do a pretty good job. Blue also worked really hard. You could tell she was sore and would fall back in the traces but then would surge forward and pull for a bit before falling behind again and continuing the cycle. She worked hard but you could tell she was either tired or her hip was sore.

This was another great mushing adventure and we're getting pretty serious about it. We want to get a few more dogs, all Siberians, and especially a trained lead dog, Right now we're putting those plans on hold until next fall/winter season because Cobey is moving to Alaska for seasonal work this spring through fall. But we'll keep you posted on any new advances in our sled team.
Posted by Cobey Williamson at 2:14 PM No comments:

Today we put the dogs to the true test...can they run in the traces pulling a sled. The answer is YES! We met with the Bitterroot mushing "club" in the West Fork of the Bitterroot up Nez Perce. This was a first for the dogs and for us, as mushers. We thought Nicki was just going to put our dogs in the traces with her dogs...but in reality intended to loan us a sled and her lead dog J.C. and we'd run the dogs. So after lots of preparation setting up the gangline, snow hook and sled we harnessed the dogs and got them in the traces. J.C. in the front, Blue in the middle and Kona and Tensaw as the wheel dogs.

We were ready for just pure chaos; the dogs trying to run every which way except for forward, but with such a good lead dog as J.C. in the front they quickly fell into line and just pulled. I took them out first and Cobey brought them back in. It was a nice, easy, gradual uphill and the snow had been packed down some by snowmobilers. It was a beautiful sight seeing them run and they impressed us and the other mushers how quickly they picked up on it. Nicki told us many times she sees this with Siberian huskies because they are bred to do this sort of thing.

All did exceptionally well but Kona was the champ of the day! She pulled hard the whole time. When she'd get tangled in the line she would untangle herself. Tensaw on the other hand does not know how to untangle himself. He got tangled many times but kept truckin' along like nothing was wrong. While they all pulled well at the beginning you could tell Blue was getting worn out by the end and wasn't doing her share of the work. Tensaw had some intenstinal distress during the sledding and caused a little bit of chaos when he stopped numerous times trying to relieve himself. The positions we put them in the traces seemed to work out perfectly for them.

All mushers and dogs enjoyed the time immensely. This will definitely not be the last time we take the dogs out sledding...we're hooked!

Brandi and Cobey
Posted by Cobey Williamson at 2:10 PM No comments:

Nicki, a musher in the Bitterroot, put on a pull clinic and we decided to take the dogs. It was very chaotic when we arrived, Tensaw began talking to the other dogs and continued to talk throughout the entire training (earplugs next time?). Blue and Kona had done some pulling in harness before, specifically with Cobey on a longboard. Both did well when pulling Cobey and I walking behind them. When the chains were attached behind them, Blue and Kona got very nervous and took a while to get used to them. Once they warmed up to it they did well.

Tensaw the 1 year old male took to it all very well. He pulled hard and was not fearful of it...but he has a distraction problem when it comes to other dogs. He will make a very good sled dog once we get him trained to ignore the distractions. Nicki said all of our dogs, but especially Tensaw, are built well for sled running, they have long torsos which make for better strides. Last in the training today, each dog pulled a wheeled cart with Nicki's husky J.C. It was thrilling to see them working and pulling; something they were made to do.

The way the dogs responded to the training today gave us some idea of where each dog would ideally work in the traces. Our thought was that Tensaw would be a lead dog (at least of the three of ours), Kona would be a wheel dog, and Blue would need to be in the middle, having dogs behind and in front of her to keep her working. Nicki invited us to join her tomorrow and to put our dogs in the traces with her dogs. More to come on that event!

Brandi and Cobey
Posted by Cobey Williamson at 2:07 PM No comments: