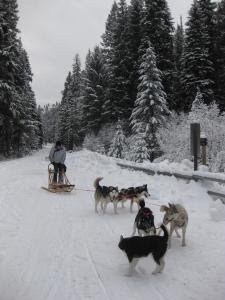 In mid-December we packed up the truck and headed to Pray, MT to pick up our new dogs, Okanogan and Paluk. The roads were clear and we pounded out the drive, arriving at the Chico Hot Springs Resort, headquarters of the Absaroka Dogsled Treks, by late afternoon. There we met Mark Nardin and he led us to his home and kennel. Mark and Sharon have a well run outfitting business with some very talented dogs (mostly Siberian husky). He led us over to Okanogan and Paluk. Paluk is full Anadyr Siberian husky, 6 years old, noisy and very friendly. Okanogan is an Omar/Ramro Siberian husky, 5 years old, and extremely timid but Mark claimed she is a different dog in harness (and boy was he right). After some introductions, questions and discussions we definitively decided to purchase the dogs and were soon headed back down the road. That night we stayed at a hotel in Bozeman. Letting the dogs out to do their business was a loud endeavor that, I’m sure, caused many eyes to peer out windows; though I avoided checking this notion because ‘if I can’t see it, it isn’t there’.

We are now home forcing this chorus upon our new neighbors. We try to keep them quiet the best we can but sometimes you just can’t stop an eager dog from talking/howling when it’s feeding time. Nor can you stop them when you’re not at home. Though like the old saying (rephrased), “If a husky howls in the kennel and you’re not around, does it make a sound?”

For the inaugural run we went to our old familiar trail, the Nez Perce Road up the West Fork of the Bitterroot NF. In that way, at least the trail was familiar for Tensaw, Kona and I, hopefully making it the easiest place for the new dogs to adjust. The run went really well. We only went 3 miles, too short for the new girls but we did not want to overrun Kona and Saw, who are not in as good of shape. Okanogan turned our team of 4 around with 2 simple commands. “Okanogan Haw” followed by “Come Haw.” I was so impressed I decided then and there my future team will consist of nothing but Okanogan offspring! Paluk on the other hand, while she pulled well, showed no leader qualities on this run. She may need more time to adjust to her new home/team, or she just may not lead for us; only time will tell. Tensaw didn’t have much motivation that day but, like always, Kona pulled hard the entire way.

Since that run Okanogan has struggled to adjust to her new home. She is still nervous and doesn’t have much of an appetite. On runs she will “haw” but not “gee.” I am surprised the more we go out the trail how similar Okanogan and Kona are, which at first I would not have guessed. Okanogan and Kona have similar gaits (same with Tensaw and Paluk) and both are very eager to pull. I look forward to many more runs with these two and the rest of the gang.
Posted by Cobey Williamson at 12:17 PM