Drying Out from the Darby Dog Derby

Now that the lines, harnesses, bags, boots, clothes, dogs and musher are drying, it is time to write about our exciting and soggy weekend. This weekend we competed in the Darby Dog Derby. The event included 8 dog/26-mile, 6 dog/14-mile, 6 dog/7-mile (no participants), and 4 dog/4-mile races as well as a 4-mile skijor. Fourteen mushers and three skijorers showed up and showcased their talent. Our team competed in the 4 dog/4-mile race. It was our first race and it couldn’t have been any more fun. We met many mushers including Trent Herbst an extremely friendly and inspirational Iditarod veteran and his daughter Lila, also racing for the first time.
Saturday the trail was getting light rain but still in good condition and I decided to run Blue which, in retrospect, was not the best decision. Halfway she was showing her age and was dragging the team back. I considered throwing her in the sled but, because I’ve never put any of them in the sled before, I decided we’d hobble in; it was not the time to test it out. We dropped Blue the next day and ran only Okanogan, Kona and Tensaw. It was raining when we left home and it was raining even harder when we arrived at the race start. All mushers were soaked through before the races began. The race was still on but, because the trail conditions were poor and extremely slow, the mid-distances races were dropped down in mileage. Since we were the slowest team Saturday, as I expected, we went out first in our class. Tensaw did better in the rain that I thought he would but Kona did not like it one bit and shook off every ten steps.
About 200 meters after the turnaround, I came upon three other teams in my class and had near tangles with each of them, no thanks to Tensaw, so I decided to pull the team aside and let them pass, which they most certainly were going to be doing in short order. It was a nice idea in theory except that once I started the team up after the other three passed (two of which were fellow Siberian teams) my dogs found new motivation and stuck right with them. I had to continue to brake the dogs until we made nomad’s land. At this point it was a mess of passing and re-passing, for each time a team would take the lead they would find no more dogs in front of them and they’d slow down prompting another team to pass and run into the same issue. The finish for the three Siberian teams was a photo finish with Deb’s team crossing first. I had an immense amount of fun with Deb and her daughter Sierra who made the trip all the way from Utah, and another young musher and his mom from Potomac, MT. I hope to see them in the future and wish them all the best on their season. Our team, as was predicted by me from the start, won the Red Lantern award (the last team). Despite the weather the Darby Dog Derby was a success. I hope the other mushers felt the same, spread the word and return next year. 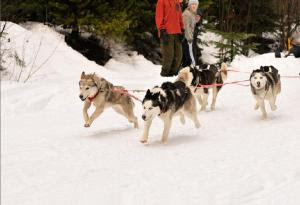 Posted by Cobey Williamson at 2:45 PM