The Beginning of a Dog Sledding Addiction

This weekend the temperatures jumped up into the 50’s and 60’s in the valley and 40’s in the mountains. It was almost too warm to run the dogs but was still cool enough that they could go a few miles. They needed to run, so we packed the dogs up Saturday and went to Nez Perce Road. Isis and Blue got to run a short ways with the team Saturday and they thanked us afterwards with big, tired smiles. Sunday I met up with a wonderful family and longtime Siberian owners to take their daughter, Annalisa, and her Siberian Nora out for a run. Okanogan was in lead, Kona was next to Nora in swing and Paluk and Tensaw were in wheel. Nora was not quite sure about running in a team at first but quickly discovered that it was quite fun. I drove the team up about 1.75 miles and Annalisa rode in the basket. We turned around, switched places, and she drove the team back. We quickly came upon her family skiing up. Nora decided to show them how well she could tangle a team, which is a real shame because she did so well before and after that pass and they didn’t get to see it. She had decided Kona and her needed to play at that moment. Kona did not think it was the best idea hence why I put Nora next to Kona; she won’t play in harness but is tolerant too. After we untangled the team, we continued back to the truck without incident and Annalisa got to feel the thrill of dog sledding. The last stretch home I got off the sled (making a much lighter load) and let Annalisa drive the team the rest of the way to the truck. Everyone did great, especially Nora, who was in the traces for the first time, and Annalisa, who drove a dog team for the first time. I look forward to more outings with Annalisa and her hardworking sidekick, Nora. 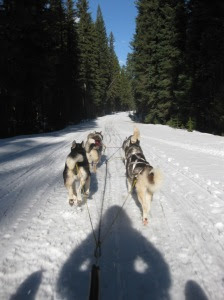 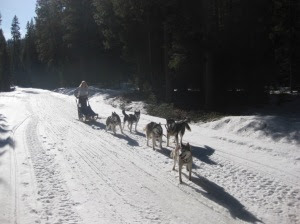 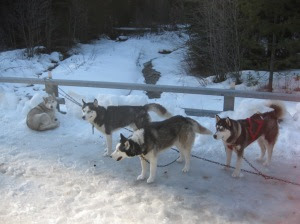 Video of Annalisa and the team:
http://www.youtube.com/watch?v=n517eKYj5wo
Posted by Cobey Williamson at 2:52 PM No comments:

Many of you may not have heard of this and some may have. A serious affront to sled dogs and humane mushers occurred last year and was brought to light last month.  As I can do no better than what Karen Ramstead of NorthWapiti Kennels posted on Tuesday I will simply refer you to her blog.

As a side note, Cobey and I both follow the NorthWapiti Kennels blog posts and results throughout the season. Karen’s kennel is what we strive to become (probably not as large though). Her Siberians not only finish big races like the Iditarod but are champions in the show ring, good on and off leash, and most of all are family.
Posted by Cobey Williamson at 2:21 PM No comments:

This weekend we finally got out on the snow again. It was great! The trail was beautiful, peaceful and perfect. Saturday, I ran Okanogan, Tensaw and Kona and they did great. I was kicking myself when I got back to the truck, though, because we only brought those three and it would have been a great day to put Isis in the traces for a short jaunt. Sunday we returned to the trail with the same conditions which was perfect because this time we brought along all six dogs. Paluk has been ready to start running again, Isis is old enough for short runs, and Blue can handle short runs so she came too. Cobey took Okie, Saw, Kona and Paluk out first for a few miles and came back with a big smile on his face. No surprise there, running dogs is fun. Then I took all six out. Saw and Blue were in wheel, Isis was next to Kona in swing/team, and Paluk and Okanogan were in lead. Isis did great! She didn’t even chew her harness or lines after I put her in the team. She tried to play with Kona at first but Kona was all about working and ignored her. While the team was running I was all smiles. Isis ran well and seemed to really enjoy it and Blue was doing great. I could really get used to running six (or more) dogs. But I’ll have to calm down a bit. It won’t be until next season that Isis can consistently run more than a few miles, Blue can only do one or two (this season, who knows about next), and it will be a bit before we expand the kennel again. 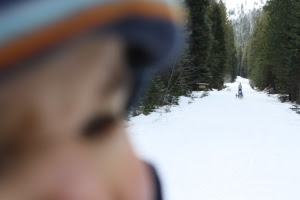 (Keegan and the team) 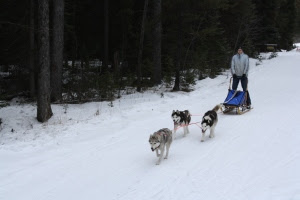 (The team returning from Saturday's run)

On the way home Cobey and I were talking about Tensaw. I’ve been a rollercoaster ride of feelings about Tensaw as a sled dog but I couldn’t help but agree with Cobey Sunday when he said “Tensaw is a sled dog.” He gets so excited to run when you put his harness on. He’s practically jumping out of his skin in the gangline. Once we get going, if he doesn’t get too distracted, he pulls well. He does not appear to be contributing much but he adds a lot of pulling power to the team. When there is slack in his tug line, you notice it. I still worry about his need to socialize with sled dogs at events, his distractibility, and his feet. The structure of his feet concern me and I’m keeping a close eye out for problems, but, lacking in experience on this matter, I can’t say yet whether his feet would be a problem or not. I applaud his enthusiasm and willingness to work, though. That goes a long way in my book. 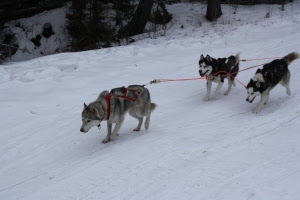 (Okanogan, Tensaw and Kona after a great run) (Keegan and his "Nuk" looking at the team)

(Note: I've been meaning to include more pictures and even video clips in my posts but keep forgetting the small camera. Sunday I forgot all cameras. I'll do better...)

Posted by Cobey Williamson at 10:48 AM No comments: