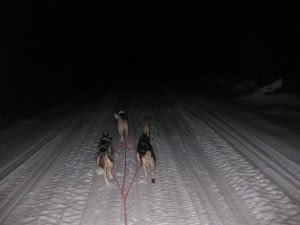 If there is one thing that would keep me from running the 300-1000 mile races, it is the dark (well and the expenses). I like to believe I could handle the lack of sleep and hard toil of the trail/elements. I’ll take a step out on a limb here, though, and admit this on our blog: I am afraid of the dark. So Wednesday evening’s run up Nez Perce with Nicki was a big step for me. After work I took the “mainstring” Tensaw, Kona, Okanogan and Paluk and met Nicki at the trailhead. Since I wanted to give the team, Tensaw in particular, practice with passing we left first. I had to run the team by hers to get to the trail and they did amazingly, especially Tensaw. All four passes (2 from behind, 2 at the trucks) went unbelievably well. Our little sled dog, Tensaw, is all grown up and mature! When all was said and done, Tensaw got lots of love. Mostly verbal, though, because he still stinks of skunk. 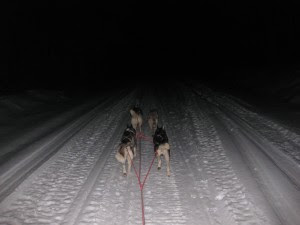 But back on the trail…we were maybe 1.5 miles up the trail when Nicki’s team (of 6 Alaskan huskies) caught and passed us. With a team in front of them my four sped up but eventually lost sight of the Alaskans. We (and by ‘we’ I mean the dogs; they did so well!) ran out 2.5 miles. It was very peaceful out and I heard no unnerving animal sounds this time. All I heard was the swoosh of the sled runners, the breathing of the dogs, the crunch of the snow under their paws, and the water in the creek next to the road. We were within a mile of the truck before Nicki’s team passed us again. I was expecting her to pass us earlier and was getting a little worried. It just turns out our team of Siberians were simply running very well. The trail was fast. It was an all around great run!

I took some video. It was with a regular camera and a headlamp so it isn't the best...but still kind of cool.

Love you puppas!
Posted by Cobey Williamson at 12:05 PM