It has been some time since my last post. Sorry. Saturday Feb 19th we ran Nez Perce (again….can you tell this is the best trail to run around these parts?). We went nearly 6 miles and once again, they all did so well. They sure love to get out and run. You should see Tensaw freak out in line waiting to run.

On the way out I heard sounds in the woods but by the time I peeled back the layers around my head I heard nothing but the swoosh of sled runners on snow and I figured we must have hit a squeaky patch of snow. On the way back down, though, I heard an eerie screaming sound in the same area. I later learned that mountain lions can sound like a screaming woman or child. I spoke with another musher who had been up there that morning and she told me she spied lion tracks on the road, not far from where I heard the sounds. I’ll need to start practicing my ninja moves with the snow hook.

Sunday we tried a new trail/road closer to our home, up Sawmill creek. Cobey ran the team this time while the young and the old pulled Keegan and I up the road a half mile. Upon Cobey’s return he was happy to report it was a pretty good road, though I still question its braking capacity due to a thin snow pack. Glad, though, that there is an option not as far away as Nez Perce to train the team on snow. 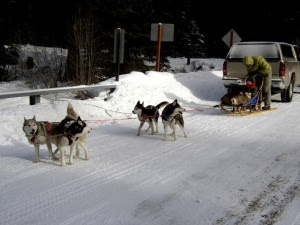 Then last Saturday (Feb 26th) I took a friend’s son out on the sled at Nez Perce. He had a lot of fun, especially when he got to drive the team. “Now I can say I drove a dog sled!” he exclaimed. He and Tensaw also forged a special bond when the boy slipped next to Saw and the husky immediately took the opportunity to lick his face silly. They were practically inseparable after that. Each took a liking to each other. 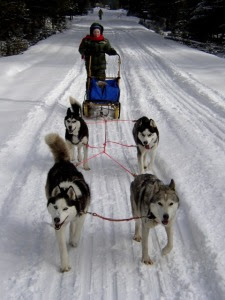 Until the next post….I will be working the stench of skunk out of my clothes and skin. All I can say is, owning huskies is an adventure….and it doesn’t always smell like roses.

Love your puppas!
Posted by Cobey Williamson at 12:14 PM