The season of the sled is coming!

♪♫ It’s starting to look a lot like♪♫….MUSHING! Well, okay, around our place it may not look a lot like mushing season, especially due to all the smoke from the multiple fires burning on the forest but it is beginning to feel like fall in the mornings. SO…on Sunday we busted out the cobwebbed cart and took the dogs on a run! My friends, the Larimer’s, were visiting so the dogs and I took Victoria along for a ride. I believe she enjoyed herself and we hope they come back to visit in the winter when we can show them real dogsledding! Yay!

Tank got to run with the team for the first time. He was a little nervous at first. He was unsure why all the other dogs were going crazy but as soon as the team started to run he fell right in line and ran. He seemed to have a good time. Isis did not have a good time because she had to be left behind. She really wanted to go but she’s had a bit of a limp lately so she needs time to heal.

We’ve also got a new addition to our kennel. Shila, the puppy formerly called female 3, has returned. She’s just as leggy and energetic as Tank and I think will do very well in our kennel but she’s a bit behind on training, having not been exposed to the harnesses and pulling at her old home. With a little time I’m sure she’ll pick it right up like Tank and Thor. 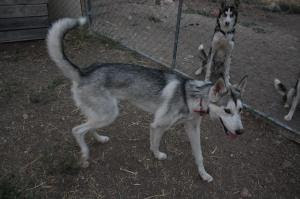 Speaking of Thor, we had the pleasure of taking care of him and his “sibling” Nora this past weekend. Thor is SO strong and LOVES to pull. Both are doing great with their commands, Annalisa has the makings of a good little team already and has obviously put in some good work with them! Both dogs seemed to enjoy their time here playing with our dogs.
Posted by Cobey Williamson at 11:11 AM