I am always very concerned about the health of our dogs. They’re very hardy dogs and rarely do we have physical health problems to worry about so I mainly am concerned on a day to day basis about their mental health. I try to keep them happy and fit and in the case of the Siberian husky (heck, really all animals, including us!) those two go hand in hand! But just running the dogs isn’t enough. They’re social and need free time and lots of human interaction. I’ll admit with both Cobey and I having full time jobs, a 2 year old son and another on the way, they probably don’t get the full attention they need, but we try! A big concern of mine is Paluk and Okie. Last year we bought them from a dog sled adventure outfitting kennel. The only time they were off their chains was when they were running in harness. We don’t want to run our kennel like that and so we’ve been letting them off the chains when we’re home and can keep a close eye on them. (….because Paluk got the nickname (about this time last year) of Ninja Dog because of an amazing skill she has. She can scale a 6 foot fence in seconds silently. We were standing a mere 3 feet away from the fence when she went trotting by). I believe this really helps them, it has done a lot for Okie who was very timid when we got her, but has opened up a lot in the last year. She still has a ways to go, though.

Last night, I had a very difficult time when choosing dogs for the run. I will not run more than 5 dogs with my cart (even then, that might be one too many). I originally had Okie, Paluk and Shilah as definites but was having difficulty deciding between Kona, Isis and Tensaw. Many factors kept bumping dogs on and off the team in my “mental line-up.” The biggest factor is we’re bumping up training so that by early March they can do a two-day 10mile/day race and I want all the dogs to be evenly conditioned for pulling. I almost always take Okie and Paluk because they’re on the chains so much but both had already had their fair share of runs early in the week. So, sadly, I had to bump Paluk off the run last night, keeping Okie for lead.

So the team was Okie, Kona, Isis, Shilah and Tensaw. We were flying; having a great run…until “the spot.” From our house there is only one safe almost car free run. This run is an out and back run but has the option to be a loop or have another ½ mile dog leg added on but that involves a lot of road running or dangerous intersections. This is not an option at the end of the day when everyone is coming home from work or it is dark, as in the early winter. So our early season runs are the out and back run that involves the same turn around. My BIG mistake is doing this over and over and over. Okie has gotten so in the rut of turning around at the spot that I can NOT get her to run past it. Last night, I was determined to get her past it. I put the brake on the cart and joined Okie in lead, grabbing one lead tug line; I slowly help Okie lead the team past “the spot” and onto the dog leg. Once past it she was fine and the run proceeded at the fast pace! I think I will have to help her past that spot for a few more runs and we’ll see if that helps. 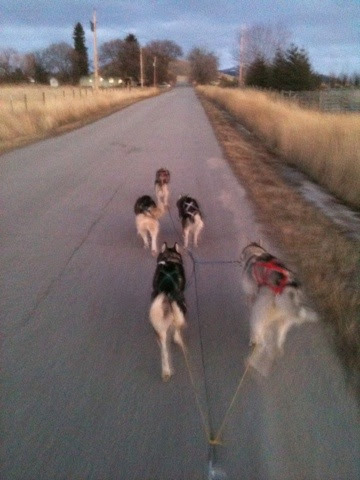 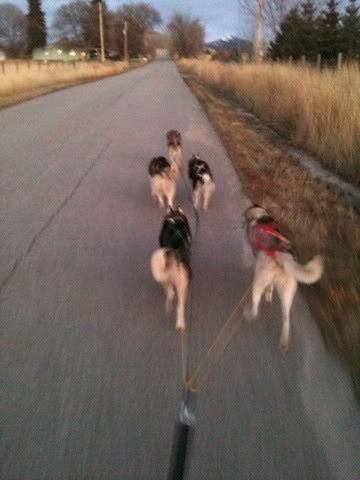 A little blurry, that's how fast they were going ;)
Posted by Cobey Williamson at 3:39 PM