The story of Kona and Blue, our look alikes

Frequently, we get asked if Kona and Blue are siblings. To us they are, just like all our other dogs are siblings too, but in the true sense of the word, they aren't. The two have a strange connection, though, and look very similar. In fact, the reason we have Blue is because they look so similar.

This story is from before I joined the pack. Kona was Cobey's first dog, some days when he would go to work he would take her to a doggie daycare called Dog Logic in Missoula. One day he got a call from Dog Logic claiming that they had Kona; someone dropped her by or they had seen her wandering near the daycare. Cobey hoped it wasn't Kona as he had left her home that day and she shouldn't have been wandering the streets. When he got there he found that it wasn't Kona but a dog that looked very much like her. He told them that she wasn't Kona but if they couldn't find the owners he would take her. The owners eventually stepped forward and took her home but soon Cobey received a call. "Do you still want this dog? We can't handle her she always runs away." Ahhh....huskies.

Kona and Blue have a special bond and we see it quite often in the way they sit together. Many times we catch them sitting identically or mirror image to each other. Frequently, we do not catch the moment on film because the opening of a door causes them to jump up. Most photos we do have are through the window or from a distance but I thought I'd share a couple of the mirror image photos we've snapped through the years. 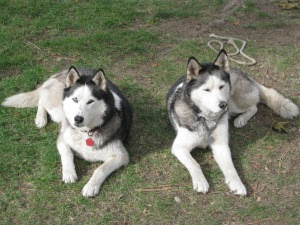 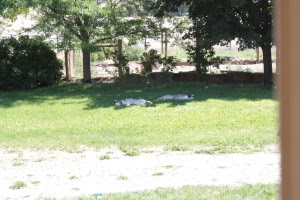 Mirror image yet not on the same plane. Mirror image on the porch. 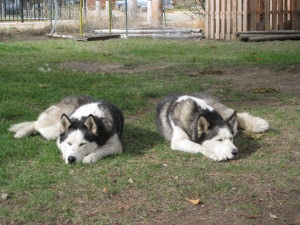 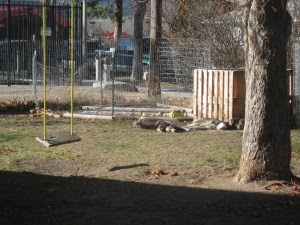 And my favorite, paw to paw in the sun. 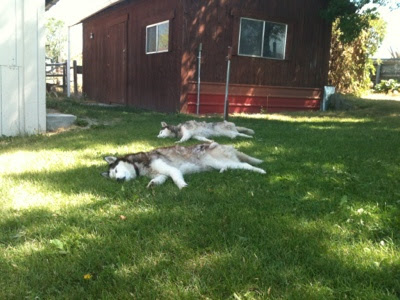 m
Not mirror image but identical.
Posted by Cobey Williamson at 7:00 AM