First Run of the Season

It's a new year. Or at least the way we see it around here the new year starts in the fall because that's when teams can start running again. I was a bit behind when I ideally would have liked to start training but, to be honest, I was a little nervous about our new training method. The ATV. As before we bought ours this summer I had never driven or ridden on one.

This being my first training run with the team on it, I only took 4 dogs. Okie and Paluk, as they have experience with that from their previous home, and Tank and Shilah, who really don't care, they just want to run.

The run was a little over 2 miles and they did good. Okie took over where she left off, turning the team around when I didn't ask. Tank promptly got placed in lead with her and it went well from there. No more single lead for Okie. Plus she needs to train the younger dogs to run lead.

You wouldn't have thought anything adverse had happened to Paluk at the end of last season, she was just right back into it, pulling with much enthusiasm.

It's good to be running the team again!
Posted by Cobey Williamson at 9:56 AM No comments:

Cobey couldn't have put it any better: "I would take one hundred more like her."

You're a great dog Kona! 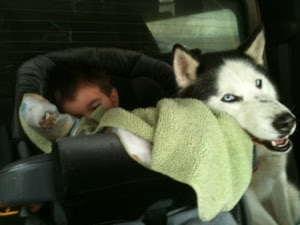 Posted by Cobey Williamson at 9:31 PM No comments: