Our training runs have been great lately! Unfortunately, I've not been running my "gee haw" leader, Okanogan, in lead because she's been my "haw-around-when-I-don't-want-her-to" leader as of late. None of the other dogs know gee/haw, at least in the gangline (they do quite well when we canicross).

Isis has been a great little, solid leader but the pace she keeps is slow. Kona is always solid but also holds a slow pace. Tank will run lead but doesn't do anything but run fast. Usually a pairing of Tank with Kona or Isis keeps the team moving forward and at a good pace. 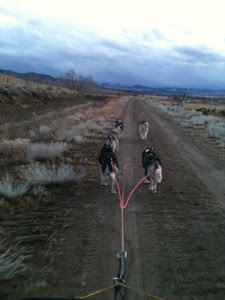 Today I decided I wanted speed, pure speed. I put Shilah and Tank in lead. Shilah was definitely the brains of the operation (she's turning into a nice leader). Learning her gees and haws; just not confident enough to act on them if her co-leader gives her some resistance. She has a weakness for bunny rabbits, but what Siberian doesn't (even Okie does, she just runs faster but, when in harness, leaves them alone). And boy are there a lot of bunny rabbits along our training route. But if you tell Shilah to "leave it" she'll often drag Tank (or other leader) on by it. Earlier in the week, she found a bunny carcass, that was fun....for the dogs....

So this evening, Tank and Shilah led the team and we were flying! Okay, for most teams a max speed of 14 mph is not flying but that's a pretty good clip for my team. Usually, we average between 9-11 mph, today we averaged between 12-14 mph! Without Okie up there it still takes me getting off the ATV to help lead them around some turns but it's all good training, and it's much less frustrating for every being involved than the alternative. 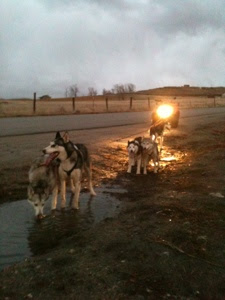 (Pic caption: Shilah and Tank leading the team getting a drink before we turn around)

Though Okie is a great backseat driver. When she's in swing she doesn't turn the team around unless I command and it helps guide the less experienced leaders! Go TEAM!

Slow but steady run in the beautiful Bitterroot Valley. Gotta love the view (not the dog butts...the panoramic).
Posted by Cobey Williamson at 7:57 PM