Tomorrow is the start of the Yukon Quest. The last few 1000 mile races (Iditarod and YQ) Cobey and I have listed out our top 5 finishers (in order listed). Here are our picks for this year's Quest.

HEY! Look over there!! 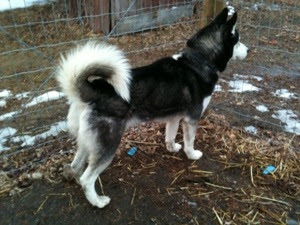 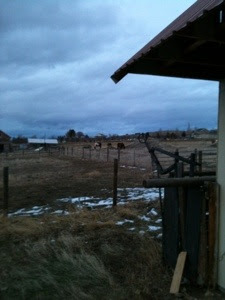 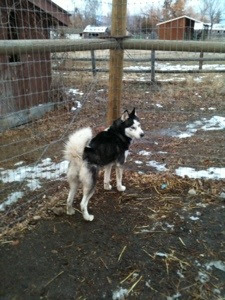 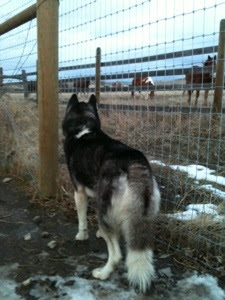 Hey! Kona, Blue! Come check these things out! They're so exciting. Great fun to talk to! 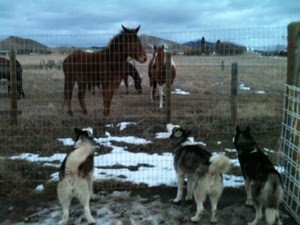 Tensaw, those are horses. Don't you remember the last time you saw a horse. You got underneath it and got stepped on?! (You were darn lucky too). You didn't like them for a long while. Must have been long enough. Time for some re-training.
Posted by Cobey Williamson at 7:02 PM 1 comment:

Email ThisBlogThis!Share to TwitterShare to FacebookShare to Pinterest
Labels: Tails

Tonight was actually a good run. Short but good. It was good for numerous reasons.
First, the team. In lead: Paluk and Kona, in swing Tank and Okanogan, and wheel Isis and Tensaw. I used this configuration the last two runs and I really liked it. First off Paluk keeps the team going forward at a nice pace may i add, and only turns when I ask. Kona is the calming voice to Paluk's insanity. Tank pulls hard but one position before wheel I feel is less demanding on his hips as he's a big boy. Okie is next to him to keep some focus and structure in the middle. Isis and Tenny are a good match for each other's gate and seem to thrive in wheel. It keeps them focused, and they are smaller in stature, I'm finding that actually helpful in a wheel dog as long as my strong dogs are one position before the wheel dogs.

So we hooked up and headed up the road. We made it up the half mile hill and about another half mile on the flat when the ATV (again) shut off and wouldn't start. I got the team to turn and they pulled that machine all the way home. I helped them initially get it rolling and then I ran/steered/pushed the ATV with them all the way to the downhill where I hopped on and rolled that puppy home. I am so proud of those dogs. They did great and never questioned me, just worked hard.

The other good thing about the run was I just rolled with the punches. I kept my cool and, in fact, instead of getting frustrated, I just got more jovial. I've made a change in my outlook and now look at days like this as training opportunities for the dogs and me as well as a problem to solve rather than to whine about. 'It's happened, so figure out the solution'. Mushing has made me understand myself more and is making me a calmer and more controlled person...that and motherhood....

Apparently, Blue is not quite retired

We plan on running the Priest Lake Sled Dog Races next weekend so the little musher and I took the team up Nez Perce this morning.  We got an early start, thankfully because it warmed up today and rained on our way home.  The weather was perfect for our run and the dogs did pretty good.  Okanogan wanted to turn the team, so she got religated to swing and Paluk was promoted to lead with Kona.

Blue has been wanting to run with the team lately after weeks of no interest.  Blue ran to the turn around in the gangline but I unhooked her on the way back as she was dragging the team back a bit.  She did good in lead as an unattached leader; keeping the team going forward.  She had a big smile when we got back to the truck.  She, and I, was happy she ran along.

Keegan also has become a great little musher and won't be left behind.  He's fun to talk with while out on the trail.  Though, he needs to learn that Okanogan's unsolicitaed turn arounds are not 'belly-laugh' hilarious.  Or maybe I need to learn they are and just relax and worry less.  A lot can be learned from a child and a dog. 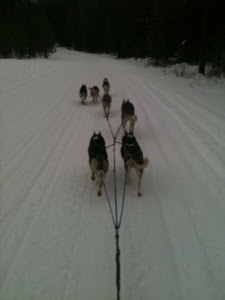 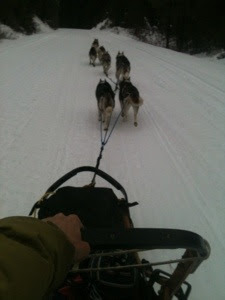 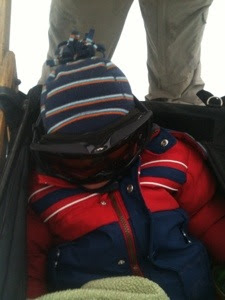 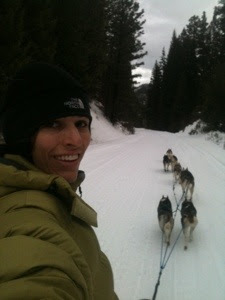 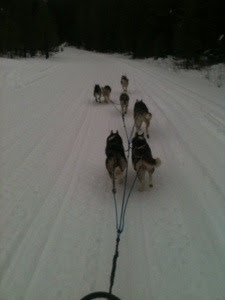 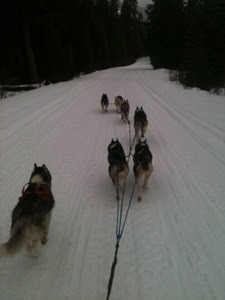 Blue a little while later....getting tired.

[youtube http://www.youtube.com/watch?v=KdOog4PH4p0?rel=0]
Posted by Cobey Williamson at 9:52 PM No comments:

Email ThisBlogThis!Share to TwitterShare to FacebookShare to Pinterest
Labels: Blue

We are members of the Bitterroot Mushers and every year since we joined (starting before we joined) the group has hosted a dog sled race, the Darby Dog Derby.

The race was this weekend and it went well. We had a great turn out. The races included 8-dog 27 mile, 6-dog 14 mile, 4-dog 5 mile, 2-dog junior 2 miles, 5 mile skijor and pee wee (1 day) classes. The weather couldn't have been better for a sled dog race, blue bird skies but cold!

As I wanted to focus on organizing the race, we did not enter a team. On the last day though, I brought my team up and we ran afterwards. As I was short on time and we hadn't run much in the last 2 weeks due to a nasty chest cold I had, we went only 5 miles. It was absolutely beautiful out there and so peaceful. Just our wonderful dogs and I. I couldn't have asked for a better run.

When we got back to the truck our race photographer was there and asked if he could go up the trail a little with the team and get some shots. I was a little doubtful that, after having returned to the truck, the team would go back out. I asked my leader, Okie, to take the team out and loop around the parking lot. When we got to the spot where she could take us "gee" back to the truck or "haw" up the trail like I asked she didn't hesitate to turn up the trail. Kona, todays other leader, was less than keen but did so and the team followed. The photographer got his shots and then they were officially done for the day. Couldn't have been prouder of the team. 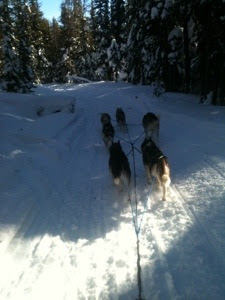 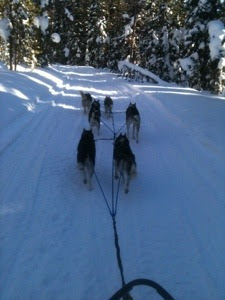 Posted by Cobey Williamson at 8:26 PM No comments:

Just ask my husband, Cobey, and he will tell you, I am a very calculated and organized person. I had my team's positions figured out for this weekend two months ago. All right that's a bit of an over exaggeration but it highlights my point. That's not to say that I'm not flexible and can't switch dogs and routes given the circumstances but I plan things.

So it should come as a surprise that last night when I walked out the door to run the team, I had no clue who would run where. Other than Paluk, who was running no where until the sore on her leg she licked clear of hair heals a bit.

I didn't think, I just put dogs where I 'felt' they should go. "Kona and Okie up front, Isis by herself in swing, Tank and Tenny in wheel" is what my mind blurted out and I followed.

So out on the run, at the point where Okie usually decides to turn the team around (somewhere we've never done so in the past), she wanted to do it but a culmination of many great things happened. First, Kona was on Okie's left. Okanogan, like Zoolander, can't turn [a team around] right. Second, Kona, great, wonderful Kona decided not to be the "push over" she usually is and just kept running, though Okanogan's tugging slowed her down. Thirdly, my mind blurted at me again, "as long as you can do so safely, don't stop." The team began to crumb in itself but all but one wanted to keep going forward AND no one was tangling. Isis swung out wide left and ran next to Kona. Tank and Tenny kept running up on Okanogan's behind causing her to run forward a bit before attempting to turn again. Quite quickly we made it through Okies turn around zone and we were back to smooth running. I was so proud of Kona!

There is something to be said listening to your instincts. But that isn't to say some planning and preparation aren't important and safe as well. 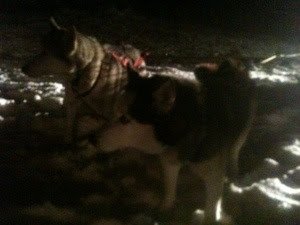 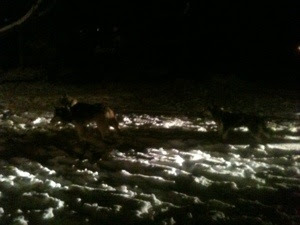 Posted by Cobey Williamson at 8:01 PM No comments:

I can't believe it's been two years already since Paluk had her litter of 8 puppies. We wish Tank and all his littermates (including Shilah and Thor over at Sixth Day Sled Dogs) a Happy Birthday!

Tank is a sweetheart. Wouldn't hurt a fly and is loved by all in the kennel. He's a bit of a dork but that's what we love about him. He's SO strong and very motivated to run. Sometimes I call him Moose because he's so big and built kind of awkward like a moose but also similar to a racehorse.

Looking forward to many miles on the trail with you Tank, and many more cuddles at home! 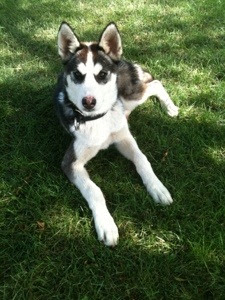 Tank as a gangly pup! 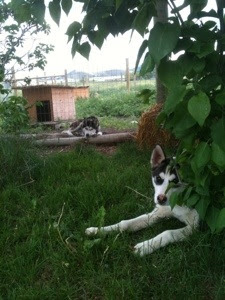 Tank and mom Paluk in the background. 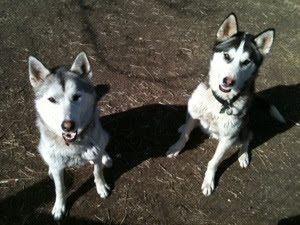 Tank and his sister Shilah, all grown up and still gangly.
Posted by Cobey Williamson at 11:24 AM No comments:

Email ThisBlogThis!Share to TwitterShare to FacebookShare to Pinterest
Labels: Tank

My ATV is fixed! Thanks hubby and his best friend, Jake! I am fixed as well after getting knocked on my back by a cold. So naturally we ran this evening. And it was wet! 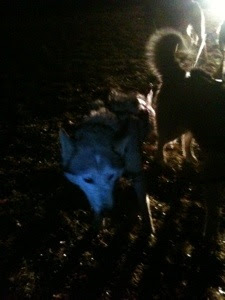 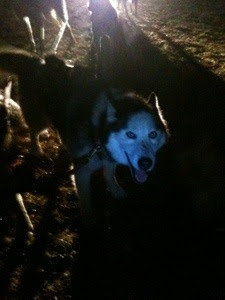 Kona, great dog, did care but toughed it out and put on a brave face! 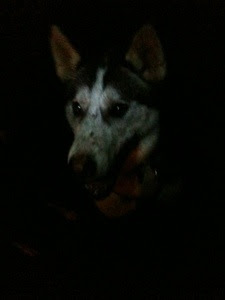 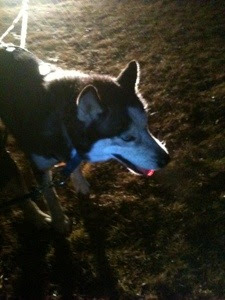 Tensaw, aka Princess Paws, he cared but had no choice as he was in wheel and puddles were everywhere. Couldn't be avoided. 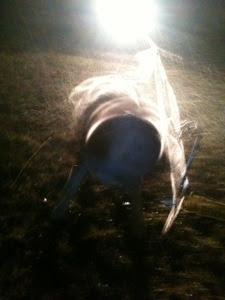 That a boy, Saw, shake it off!

Happy New Year everyone! We hope your first day of 2013 was exciting as ours. We, of course, took the team out for a run! Went up Nez Perce for the first time this season. Snow was great, weather was wonderful, dogs and their humans had fun! We met up with a couple other mushers in our club, the Bitterroot Mushers; Nicki Arndt and her team training for the Race to the Sky 100 mile and Annalisa and her kennel, Sixth Day Sled Dogs. Annalisa's kennel last year consisted of 2 dogs, Nora and Thor (who was a pup from Paluk's litter in 2011).

Nicki ran 20 miles and Annalisa and my teams ran 8.5 miles.

For Christmas, her parents were allowing her to add another dog to her kennel and we gave her Shilah. Shilah absolutely ADORES Annalisa and Annalisa loves Shilah. Unfortunately, Shilah had not been doing well in our kennel because her and Isis do not get along.

I will miss her but am not heartbroken because I know Shilah is going to be MUCH happier with Sixth Day Sled Dogs (Thor being her brother and all). I also know I will see her quite often as we run together during the winter and, well, they have to come pick up dog food from us every once and a while :) 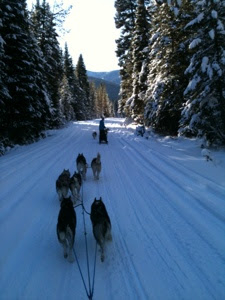 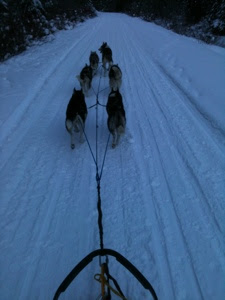 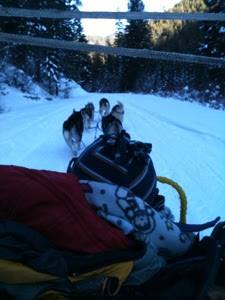 Posted by Cobey Williamson at 8:18 PM No comments: