On Wednesday evening, the team and I embarked on our recent routine of an evening sled run. I loaded the 6 dog "race team" (Paluk, Okie, Isis, Kona, Tank, and Tenny) as I wanted to see how they'd do on a 10 miler. As the last race of the season in Stanley, ID closes in on us I needed to see if we were even in the running.

The short if it. Yes we are! They ran fabulous! Not one stop and an average of 6:45/mile which for that hilly of a run is excellent for our team this season! If we decide to make the trip to Stanley, I think our team is going to do just fine.

http://youtu.be/t1PnUic1WXs
I thought I got a GREAT 2 minute clip but apparently my phone didn't have the memory space and I only got 12 sec of dogsledding glory! 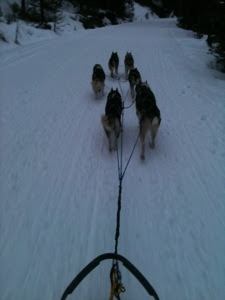 Posted by Cobey Williamson at 10:04 PM No comments:

Email ThisBlogThis!Share to TwitterShare to FacebookShare to Pinterest
Labels: Tails

I realized I never posted these! Better late than never! 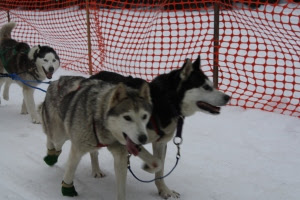 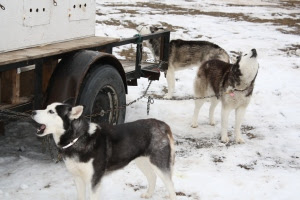 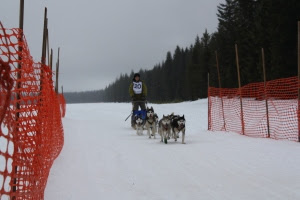 Posted by Cobey Williamson at 10:04 PM No comments:

I've said it before, Okanogan is a phenomenal dog and I'll say it again (over and over). She is amazing! She's mostly gotten over her need to turn us around when we stop on the trail. I don't know what it was, but I've given her immense amount of praise for "holding" and continuing "straight ahead" when she looks to be thinking to turn. She will run by ANY distraction (bunnies, deer, people) and knows her gee and haws down pat! She is the best leader a musher could have!

This evening Okanogan and I took Flier on a canicross run. I wanted to see how he'd feel about running in harness. He feels very strongly about running in harness. And he IS very strong. That was the fastest canicross run I've been on yet (stronger than Paluk and even stronger than Tank!!!) He is definitely a puppy though, because MANY things distracted him and that's where the most amazing lead dog/puppy trainer came in. She is SOOOO patient, just does her job (and beyond) without complaint and with extreme confidence. Flier tugged her every which way and she simply listened to me and corrected him. I love that little dog! And Flier....I can already tell; great addition to the team. (Not to mention, Tank and him are already best friends!) Good puppas!
Posted by Cobey Williamson at 8:38 PM 2 comments:

It was too warm to run dogs today. WHAT?! How could I be saying that mid-Febuary? I know, it's ticking me off. We're not ready for spring around here yet.

So in light of a post about us running today, I thought I'd would outline our kennel and race goals. First and foremost, our goal is to have happy, healthy dogs that are trained well in harness and off. These dogs are first and foremost, family members.

As far as dog sled racing goes, we ultimately would like to run some distance races; particularly the Eagle Cap Extreme 200, Race to the Sky 350, and Yukon Quest 300. Currently we run sprint races 5-15 miles a day, as that is the training we can fit in currently with small children that is what we race. Eventually we'll work up to mid-distance (as well as, hopefully, pee wee then junior races...), the Race to the Sky and Eagle Cap Extreme 100 milers, and then the 200-350 mile distances. Those are our goals, we'll see which trail life leads us down though! But you can be sure we'll follow it ByDog!
Posted by Cobey Williamson at 10:35 PM No comments:

Yesterday evening I met up with Nicki and her team up Skalkaho and ran the team.  We got a bit of a head start on Nicki's team but it was 3.5 miles until she caught us.  I was quite impressed (as was she) with the speed my team was running.  We had such a smooth run with Okie and Paluk in lead. The first mile Paluk kept trying to turn back but Okie (couldn't believe it!), Okie kept the team running forward!  Kona and Isis ran swing and Tensaw and Tank ran wheel.  It was so peaceful and beautiful out there and I can't wait to do it again.

Sorry, the pictures are blurry because of the low light but I just had to share the pictures of the great athletes!  Whereever you go, go ByDog!

Posted by Cobey Williamson at 9:33 PM No comments:

Those that are mushers will understand and might be jealous of this next statement, the rest (unless you're nutty like us), will just roll your eyes or start planning an intervention.

We're getting another dog! 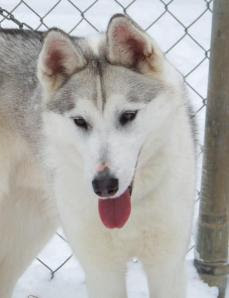 Yes you read that correctly. An opportunity was presented to us last week to obtain a NorthWapiti lineage stud and we jumped on it. For those that do not know, there are a handful of "big names" in the Siberian distance mushing world. To us the top kennels are Manitou Crossing, NorthWapiti, Tsuga and Anadyr.

Meet Flier!  He's a 10 month old beauty!  He's not here yet, he should arrive next week. He's catching a ride with a musher headed to Alaska and they're stopping at a race in Minnesota this weekend. 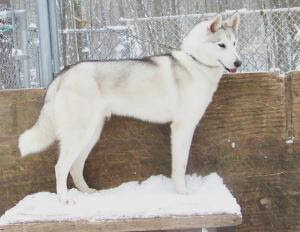 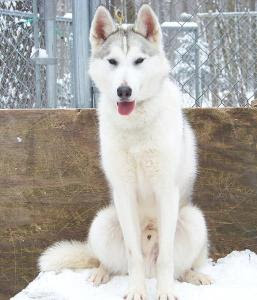 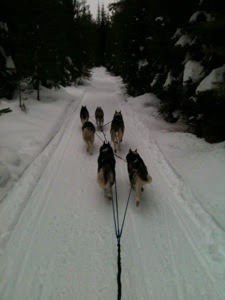 After a night of multiple trips outside because Paluk had the runs, I wasn't sure what my team was going to look like today. I felt Kona may have been a little discouraged after yesterday's fast pace and I was going to "play it by ear" to see if she was going out today. I had decided at about 3am that Paluk wasn't running.

Fast forward to the race shute and all six dogs were in line. Okie and Paluk in lead, Tank and Kona in swing and Tensaw and Isis in wheel.

In a last minute decision between my manager (my husband, Cobey ;) and I, we switched Paluk and Tank, as I originally was going to run Tank in lead. Paluk, to our surprise, had completely solid poop in the morning, It was so strange, I was starting to believe I dreamt the whole night up. Kona, looked excited this morning to run but to be sure I took her out of lead to spare her the pressure (she can bare the weight of the world sometimes). 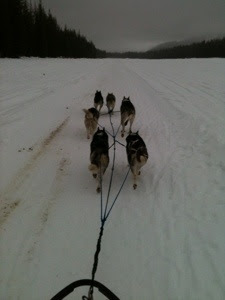 This run was even more excellent than yesterday, a little slower pace but less issues, which ended up leading to a faster time, by 2.5 minutes. The last turn to the straight away was less of a problem today, though the team still wanted to take a tight left. This time I caught the error earlier and was able to lead Okie over to the trail where she held and we continued to the finish smoothly! Great job Puppas.

And as an added bonus, since we were the only purebred 6 dog sprint team, we won our first race ever just by finishing!
[youtube http://www.youtube.com/watch?v=b4LYf8qgRUY?rel=0&w=420&h=315]

The first mandatory meeting wasn't until Saturday morning but we took the day Friday to take our time traveling up to Priest Lake. We rented a cabin at Elkins Resort (one of the generous race sponsors) and were quite pleased when we walked in. The cabin is quite spacious, warm and cozy. The logs in the fireplace lit up quickly and pretty soon after dogs were dropped and back cozy in their boxes, we were cozy in ours.

Saturday morning we arrived with enough time to comfortably unload and walk over to the musher meeting. Though the parking lot was full of Siberian teams, we were the only team in the 6 dog sprint purebred class. I was given bib number 20 (a good solid even number, I prefer even numbers) and soon enough we were headed down the trail Paluk and Kona in lead, Okanogan and Tank in swing and Tenny and Isis on wheel. The first mile was on a flat straight that was just smeared in dog poop already which caused some consternation for Tensaw but we got through it. Soon we were winding through the trees and speeds that impressed me, coming from our team.

The course was narrow, fast, flat and a lot of fun! The team was so focused for the first 4.5 miles and it was beautiful. Paluk was taking her gee/haw commands great and even ran us by a quick little squirrel that I thought would be the end of us.

But at a little more than a mile to go the focus disappeared and our quick trip was all undone. Around the last turn Paluk took it too tight and led the team onto a snowmobile track instead of the groomed trail. I tried multiple times to get her back to the trail as the lack of base where we were at was stressing the team. Finally we got back on the trail but Paluk attempted to turn the team around multiple times, often back off the trail following snowmobile turnouts. The finish was clearly in view. Did she not want to finish?

Finally after we ran the gauntlet of photographers (which was quite startling for Paluk) we finished. I think all in all it was a successful run.

Note: As Day 1 was actually Saturday but were out of internet range until now, Day 2 story will be soon to follow (with pictures and video).
Posted by Cobey Williamson at 3:44 PM No comments: