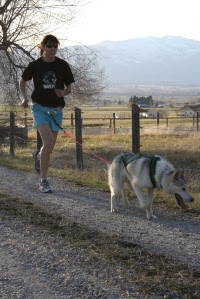 A few years back I was pretty sure I invented a new sport. I got tired of constantly telling my huskies to "heel" while they choked themselves by their collars every time we went running. So I put them in harness, jury-rigged a skijor belt from a waterbottle belt and off we went. It was great! Good fast workout, took the dogs out running with me more and it was a great one-on-one or one-on-two way to train my dogs in harness.

I soon found out, with a little research, what I had discovered was called canicross. It's a popular dryland event in Europe. The few canicross races I've found in the US are mostly in the Northeast and upper Midwest states. It is much harder to find a race in the West, let alone Montana. My dream since I learned this was to host a canicross race in the Bitterroot Valley. It seems this year will be the year. The Bitterroot Mushers are well on our way to hosting a race in May (information soon to be posted at www.bitterrootmushers.org).

But the main point of this post was to talk about my run with Flier this evening. I was fully prepared for quite the "puppy show." He proved me quite wrong. Of course, he got distracted by the ground squirrels but other than that it was a stellar run and he payed attention very well and pulled hard. The last half mile he was mentally and physically done (it was warm), so instead we walked home and worked on walking on leash. I had planned to have Cobey take some photos of canicross for our race so up the drive way I put his harness back on and gave it a try. He was a little unsure why Cobey was crouched by the fence so he was not pulling hard until we got past him. But the pictures are fun none-the-less. 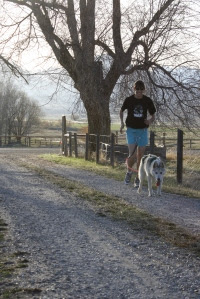 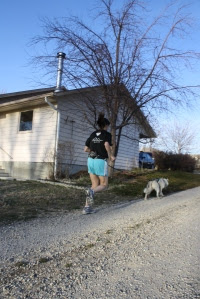 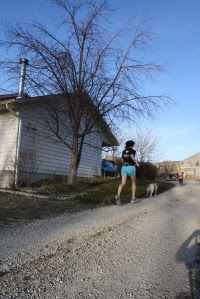