Stanley, ID?...the answer is no

For a multitude of reasons, we have decided to not race at Stanley this year. Last Wednesday we had an amazing 10 mile run but Saturday's run was a different story. I took another friend on a dog sled ride and had only planned to go 5 miles, at most. We did make the 5 miles but it wasn't pretty. Dog were exhausted. Most likely due to the warm weather. It was 30 degrees F when we started but I'd guess by the time we finished it was into the 40s. (It eventually got into the 50s that day; gorgeous day!). I do not run my dogs at the end of the season in temperatures over 45 degrees. In early season I will run them in 45-50 degree weather butthey are acclimatized to the warm weather and they have their light coats on. In the late winter when it starts to warm, most still have their thick undercoats and are used to the cold weather so are likely to overheat and tire quickly. Another reason I've decided to not run at Stanley, temperatures are forecast to be in the high 30s, low 40s. It is harder at races to not run the dogs due to warm weather, not because I am super competitive but because we traveled all that way and the dogs get jazzed to run (no matter what the temperature) when they're traveling in the dog boxes and they are around other sled dogs. So it's best not to tempt myself. 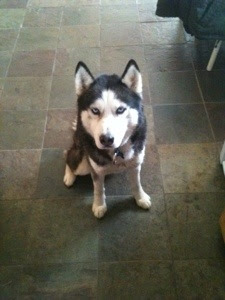 Given the change of weather, the constant traveling we've done the last few months, and the dogs having a less than stellar weekend I decided it best to not push it. We'll instead have a relaxing weekend at home with a couple local dog sled runs, how ever far (or not) the team wants to go.

During the warm Saturday weather, I did some much needed maintanance on my dog sledding equipment and mentally prepared myself for the inevitable end of the mushing season (time to start canicrossing!). Though it's never that tragic as spring is a very enjoyable season and we all (dogs and, especially, young musher included) like to garden.
Posted by Cobey Williamson at 9:24 PM