Today I was furloughed because of the government shutdown.  So, since we JUST got the ATV back from the shop I decided today would be a great day for our first training run of the season.

Trying to set the dogs and myself up for success, I put my two trusted leaders in the front, Tensaw in the middle and Tank and Flier in wheel. Blue is retired and Kona gave me a look this morning that oh-so-clearly told me, she was joining Blue.  Isis can be a bit snarky with Paluk and since it was our first run back in months I decided, to Isis' dismay, to leave her with the retirees.  Sorry Isis, I'll get you next time.

I need to get better chock blocks because the team was READY to go...before I was.  After I calmed them down we took off. It went VERY well. Flier was a bit nervous when I got him in harness and put him in line but we had a little cuddle and talk and he figured out it was just like the last few runs last season and was then he was amped!

I took them to this spot that has a little loop (only about 100m loop), I've decided is my short run turn around.  Hopefully this will help Okie with her turning around in the trail habit.  The loop is a slight diversion off our usual route so I was a bit concerned I wouldn't be able to convince the dogs "straight ahead." No one but Paluk has taken this loop with me. Paluk and I took it a few times this spring and fall while canicrossing which is when I decided we should use it. Surprisingly it only took two corrections to get the team to take the loop.  Paluk knew exactly what we were doing but Okie pulled her twice back haw.  The third try you could tell it clicked and they lead the team around the loop and home. They all did awesome! 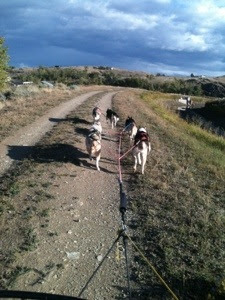 On the way out! 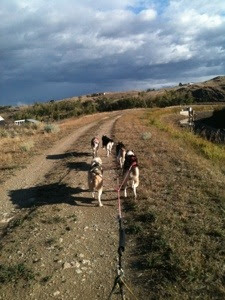 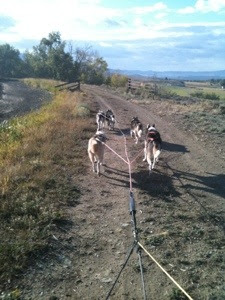 After the loop, feeling confident! 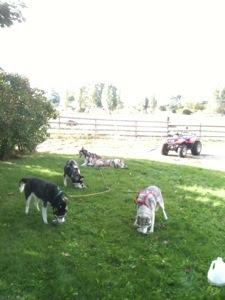 We eventually want to get into distance racing (Not this season or the next, as we an old small team but maybe three from now. We plan on having a litter in the spring). I have decided I should train the dogs to snack/drink on the line.  They all did well.  No one trying to steal from the other or be protective of their bowls. 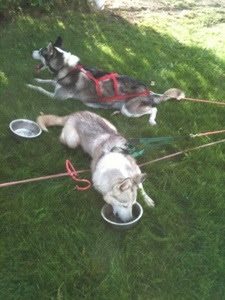 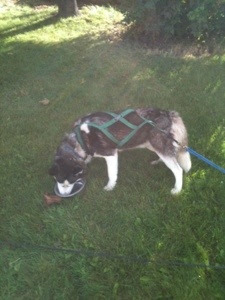 Tensaw did very well too!  Proud of our TennyBear 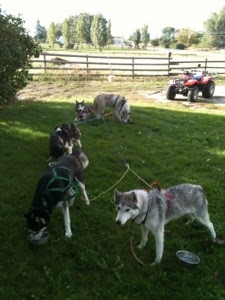 Love our team!  Good Puppas!
Posted by Cobey Williamson at 10:07 AM