The Surprise Leader and Litter

When we returned from our anniversary trip to Hawaii we discovered that Okanogan would be having a litter. We believed we'd kept Flier and Tensaw from her but apparently not. This is fine as we wanted to breed her during the last cycle but did not want to leave her during her pregnancy.  While it wasn't ideal, it worked out.  This weekend we got puppies!  Like with Paluk's litter, it took her a while to whelp but she never seemed stressed and was looking/acting fine. She had 5 puppies!  3 males, 2 females all just as squeaky as the next.

We suspect given their colors (but suspected before the whelp given the proximity Tensaw to Okie in the yard) that Tensaw is the sire, though we'll have testing to find out. Two of the pups are black and white, two are silver/dark grey and white and one is red/copper and white.

...Since we're on the subject of Tensaw! Okanogan has been out for our runs early this season as well as Tank (until recently) because of and injury.  This made it difficult figuring out my team combinations.  Isis and Paluk have to have a "layer" of dogs between them so I had to run 4 dogs in a 6 dog formation. Either Paluk could run lead and Isis wheel or the other way around.  I decided I needed a reliable leader, which would put Paluk in lead (Isis will run lead but I can't trust her to not get distracted or keep the team lined).  So that put Isis in wheel.  I want to set Flier up for success for his first runs in lead, so he wasn't going in lead (and probably won't until I get Okanogan back in the team). So I put him in team. So that left Tensaw to run lead with Paluk.  Paluk is a good lead dog but she's more comfortable with another dog, even if they are a complete screw up. They give her the confidence she needs as well as pushing the speed a bit.

The last time I ran Tensaw in lead was 2 years ago and there's a reason it was that long ago. Back when I still trained with a 3 wheeled cart, I had him running lead with Kona, a sweet dog but kind of a pushover.  We were running along the ditch road and a couple was walking their dog in the empty ditch to stay out of our way.  Tensaw decided he HAD to go visit that dog and pulled the entire team down in the ditch...I just BARELY kept the cart up top, it was a mess to straighten the team out.  I swore never to let him run lead again.  But here I was trusting him, at least this time with a leader who's a good leader trainer.  In fact, Okie and Paluk both seem to need a "project dog" to run with.  By themselves they turn the team around randomly or lack confidence; running with another dog that's trying to pull them after deer, dogs, or smells, they keep the team lined out.

BUT Tensaw hardly even acted like a "project dog." He totally impressed me.  I thought it was an anomoly but I've run him 3 times now in lead and it's all the same.  He's focused, has good speed and drive, and with Paluk keeps the team in line.  AND!!!  He even runs by other (fenced) dogs without hardly batting an eye at them!  SO proud of my Tenny Bear (and his pups!).

We're thinking about theming the litter names after saws.  Such as Buck, Hack, Rip, Whip and Jig.  Appropriate too as they sound like Halloween type names....which was the day before they were whelped! 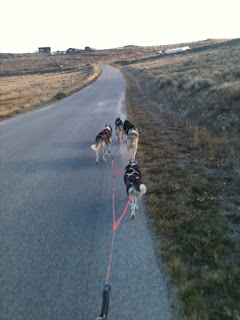 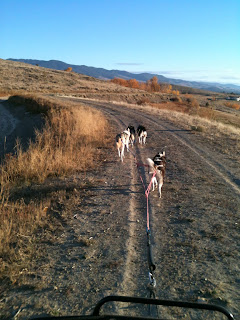 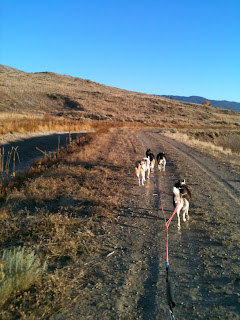 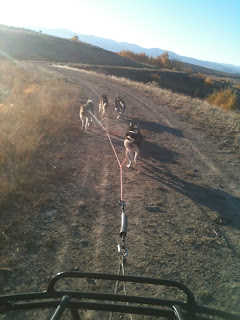 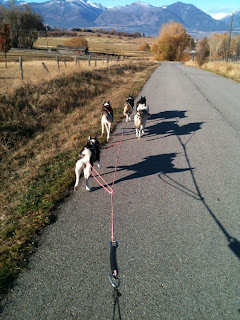 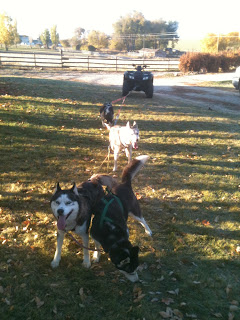 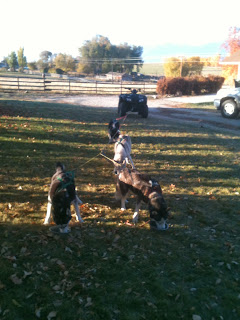 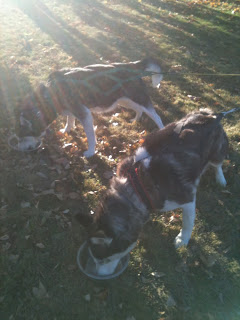 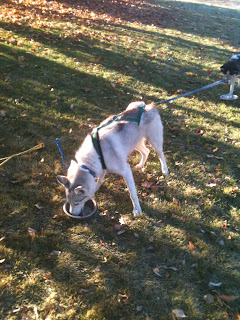 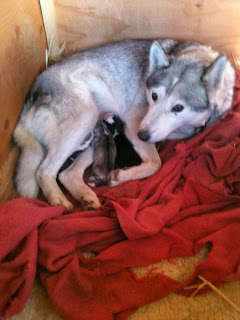 Okie with her puppies
Posted by Brandi Williamson at 8:07 PM