Run with a Friend

Today's run was a great way to start the new year! We met up with Nicki Arndt and her team at Gibbons Pass Road (again, only place with snow).  Beautiful day (too warm in the valley but perfect on the hill). I decided to put Flier and Paluk in lead, Tensaw in swing, Isis and Tank in wheel. We took off and I promptly dumped the sled on the entrance to the trail.  After righting myself, we continued on our run.  Nicki hooked up her team after me, especially because our team was two dogs less than hers and historically we are much slower.  It wasn't until 3.5 miles in that Nicki's team caught us. 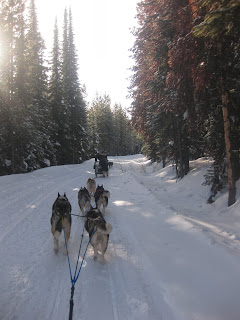 By then I had moved Paluk into swing because she was causing Flier some confusion, he couldn't keep his pace, she kept tugging him backwards.  Flier single lead and he did great for a while but seemed to need a co-leader with him after some time.  Nicki came up on us when I was going to put Tank in lead with Flier, Nicki suggested passing us and running in front of us.  We did that, and Flier found a new motivation and kept the team right behind Nicki's (in fact I had to ride the brake a ways). At the Hogan's cabin turn off we swung back around and headed back.  A mostly uphill slog though! We kept with Nicki until about 2 miles to go. A few of the dogs started limping because they had ice balls gathering in their feet. 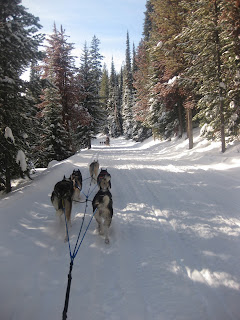 We stopped, I cleared their paws and we had lost sight of Nicki by then. We had a bit of a tangle when we passed a group of xc skiiers with free running dogs.  They moved on and I decided to spend a bit of time with Flier on "line out." He has a tendency to wonder back to the swing dogs when I head back to the sled.  He's a quick learner so it didn't take him long to figure it out. All in all, it was a very successful run! The team did great! 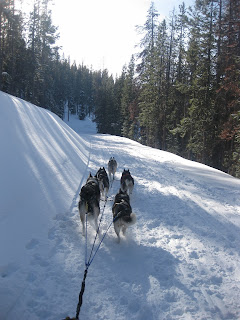 Posted by Brandi Williamson at 8:42 PM