This weekend the ByDog Siberian team traveled to Olney, MT for the Flathead Classic Sled Dog Race. The last time we raced here was in 2012 when it was the Flathead Sled Dog Days. The race has since moved locations to the Dog Creek Lodge and Nordic Center 23 miles west of Whitefish on Highway 93. The lodge was overrun by mushers and dogs this weekend and by the time we signed up was completely booked out. We stayed at the Grouse Mountain Lodge in Whitefish, former location of the Flathead race vet checks.

I dropped the family off at the lodge and drove on to Dog Creek Lodge Friday night for the musher dinner and meeting. It was a small, cozy space that had to accompany the much larger pool of teams than in the past. Most of the surrounding states have poor to no snow and many races have been canceled but Montana is rich in snow this year and all the mushers knew it. The taco dinner was tasty and enjoyable with the company of other dog enthusiasts. These dinners always consist of tales from the trail and non-stop talk about our dogs and all the stories that go with them. We LOVE talking about our dogs and know other mushers will lend an ear much more readily than our friends and coworkers who are mostly sick of hearing about our dogs ;)

After that was the musher meeting. And might I say, the most comfortable musher meeting I’ve ever attended. There was large, comfy lounge chairs, soft lighting and beautiful mountain lodge decor. The meeting was long, as one would expect with the number of entries in the race. ByDog Siberians drew bib #34 (Great! I love even numbers!) and the Five Star Rentals of Montana sponsor sled banner.

The next morning was the usual pre-race routine. I got up and went directly outside to drop dogs, let them stretch, have a snack, water and potty. The boys had their necessary cereal and weekend cartoons and we left for the race site, 20 minutes away. The parking was interesting at this race, but the officials made it work we found a nice spot nestled between Jenny and Mike Roddewig and the wonderful Kim Stanley, another Siberian team from across the border in Cranbrook, BC, Canada.

It would still be a few hours before we raced, so we got settled, dropped the dogs, chatted with mushers and decided which of the two sleds I would run. I brought my Adanac sprint sled which is equipped with a drag brake, yet is old and slightly warped so doesn't always drive the best on long flat trails. I also brought my new Adanac kit toboggan sled given to my family by Cathy and Leila from Missoula, MT. This sled is smaller, lighter but stiffer and lacks a drag brake. Each sled has different grades of runner plastic which will glide better on different types of snow. I got both sleds down and pushed them across the snow. The kit sled was difficult to move, not easily gliding on the snow while my sprint sled slid easily. My mind was made up...and it wasn't until I was on the course did I thank my lucky stars I choose the sprint sled.

While they had discussed the course at the musher meeting, I was getting tired and did not pay attention as well as I should or I would have taken note about the hills. Thank goodness I had a drag brake! Less than a mile in we climbed a monster hill. I did a lot of running with the team, this spot being extremely necessary. There was not way my capable team of 4 was going to pull my large-butt up that hill without help. But what goes up must come down and the downhill on the other side was just managable with my drag brake. There were many ups and downs and sharp turns but it was OH so fun! (As a result of the technical requirements of the course, I did not manage to take many pictures and I forgot my GoPro).

Jig and Whip did a wonderful job of leading the team around corners and by teams without incident. We had passes from behind, head on passes, and a pass by the start/finish chute mid-race that can be mentally difficult on a team! The whole team did beautifully. Jig and Whip were like weavers and Buck and Flier were my muscle men. After day 1, I had no clue how fast we went or what place we were in but I was immensely proud of how they performed so it did not matter if we were in last, I was happy with the team!

The next morning, once we had located our children in a 25 minute, panic-inducing search of the large Grouse Mountain Lodge (which the boys had become accustomed to wandering about), we were off to the race site again. Upon arrival we learned that after day 1 we were sitting in 5th place (out of 14!!!!!) That was a big deal for us. We spent our first many years in mushing bringing up the rear. While I'm a very competitive person, surprisingly it did not bother me much, as I was there for the atmosphere, fellowship and fun with my dogs. But it sure has been nice this season to see our years of work and dedication to our breed and our dogs pay off.

At first I was slightly nervous about being in the top 5 but calmed down after reminding myself why we do it, for the dogs and to have fun. I have great faith in my dogs and believed they would do the same thing again on day 2; even after how hard they pushed on day 1. They did not disappoint and put up another stellar performance even though I'm sure they were tired and sore (because I was after day 1....lots of hill repeats in the snow...good for my canicross training).

In the end, we finished the weekend in 5th place. By far the fastest Siberian team and well competitive with the entire field. Many people in dog sledding like to snub the Siberian husky often calling them "Slowberians" so I took a great amount of pride showing the competition that Siberians are just as good at racing as they are beautiful to look at and fun to live with.

We have had a wonderful season (dryland and snow); it has taken us many years to get to the point we're at. My family has put up with a lot. Countless hours of mom out training dogs, many times of the dogs being put first, lots of money spent, toys destroyed by the teeth and jaws of dogs, and lots and lots of poop. But we've also had joy together with the team. Runs with the whole family, games of hide-and-seek where mom (and her radius of dogs) was so easy to find, so many dog licks, and Christmas tree retrieval by dog sled...just to name a few. Thank you family for the fun and the sacrifices you've made for this dream. 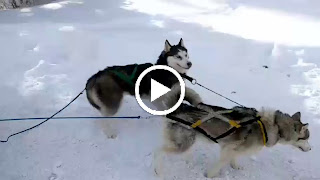 Posted by Brandi Williamson at 9:54 PM