The last weekend in April was our first IFSS sanctioned race in our bid to qualify for the 2019 World Dryland Championships in canicross.

To sum it up: it was amazing! 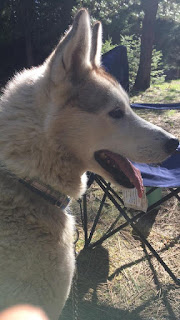 I have heard Pacific Northwest mushers rave about Camp Koinonia (Camp K) as a magical place. I always thought it was a bit of an over exaggeration....until I visited myself. It IS magical. The trail system was beautiful. The camping area was great. It is dedicated to dog sports most the year. There aren't many places like it.

We originally were slated to run in the 4-dog sprint as well as the canicross. We ended up only racing in the canicross division. After work on Thursday we departed for my friend Vic's house in Spokane, to split up the long drive. In the morning two dogs (Buck and Jig) from my 4-dog sprint team had the runs but seemed fine. Luckily Sonya, also from the Bitterroot Valley, Montana, was coming through Spokane that morning. So Flier and I caught a ride. Cobey, the boys and the remaining 8 dogs went home. We were afraid they had a contagious illness that could spread to the other teams at the race. Eventually, no other dogs in our kennel were ever affected (including Buck and Jig's littermates who are housed with them). We suspect now that the rapid rise in temperature the day before travel combined with the stress of travel produced the symptoms. Either way, I think it was the best decision for the dogs. Thank you to my husband and boys who often get the worst end of the deal involving dog racing. (Thankfully, Cobey took the boys out camping after returning home, to soften the blow of a "blown weekend" for the boys).

At the race, Flier was absolutely amazing. Usually canicross races have a mass start but they had interval starts at this race. We started in 5th position of 6. Flier pulled hard the whole time and pulled even harder when we came upon other canicross teams. Flier is a competitive guy and does not like seeing any other dogs in front of him.

We finished the 1.5 mile (hilly) course in 8 min 20 seconds; the fastest of the 6 competitors. I was very proud of Flier. He worked hard and had beautiful passes. Also, he's really come out of his shell. He used to have severe stranger danger fear but he now allows anyone to pet him. That was great! 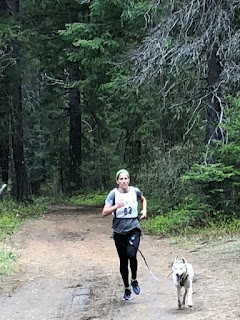 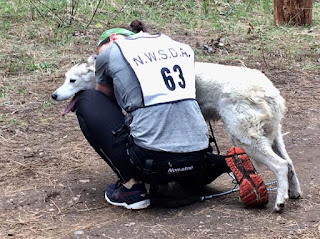 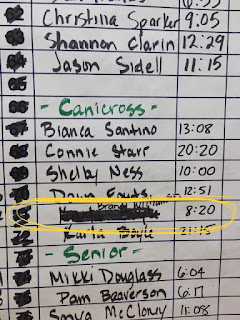 On day two we started first because we were in first place. That meant we had no one to chase. I thought we would be much slower because of that. But Flier and I must have pushed hard (it sure felt like it) because we finished in 8 min 24 sec!!! Only 4 sec off Saturday's pace! 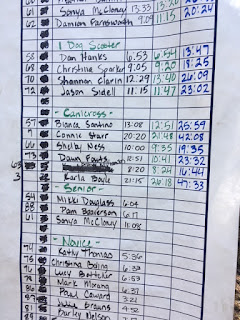 I was very pleased with our performance! Hard work does pay off!!!

I am very blessed to have extremely wonderful and supportive friends and family who all traveled several hours to come watch us race (for less than 10 minutes): Vic, Allie, my mom, dad, sister, Alece, and her two children.

A wonderful weekend that only could have been made better by my whole healthy team and family being able to attend. Thank you to everyone who is making this possible for us! One step closer to our goal: IFSS Dryland World Championships 2019!!!!!


Posted by Brandi Williamson at 7:12 PM No comments: