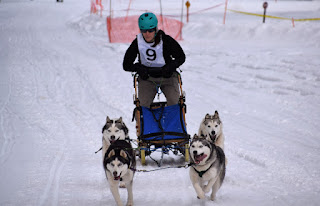 Last weekend was the Priest Lake Sled Dog Race. It is a long running race, having run its first 50 years ago. This is our favorite race. The course is a blast, the accommodations are splendid (Elkins Resort), the lake is beautiful, and the club/race officials are so relaxed and friendly. Unfortunately this year, my family could not come with me (which we usually treat as a family vacation). Fortunately for me, my friends Valentina and Stefano came with! 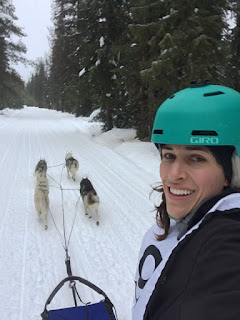 Things did not look promising when it began raining at Sandpoint, Idaho and only got heavier the closer we got to Priest Lake. It poured all night, huge puddles around the cabin and wet dogs every time we dropped them. Our cabin-mate, fellow Siberian musher Kim Stanley and I were beginning to doubt our decisions to attend the race. Moods were definitely improved when we ate the wonderful dinner Valentina and Stefano made us. A rich pasta dish (can’t remember the name) along with pork chops (cooked to perfection) and potatoes. 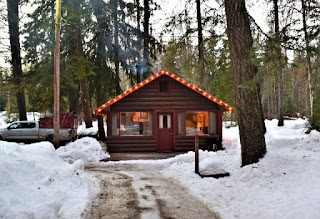 By the next morning, the rain had stopped and we all were ready to race. Valentina and Stefano were volunteering, they were going to post up on the first turn, making sure the teams made the gee turn. This year we were entered in the 4-dog sprint, 2 days of 4.7 miles each. I was running Jig and Whip in lead and Flier and Buck in wheel. There were 6 fellow competitors, of which Kim was one. The day was warm, the snow was soggy (but not too bad, given the amount of rain overnight. As the day progressed more and more spectators arrived. Each time I dropped dogs, a large semicircle of people formed to ask questions and pet the dogs. How could they not, our Sibes are beautiful, if I may say so myself. In fact, I had the friendliest spectators parked right next to me. They traveled 1.5 hrs to come watch the races. They basically tail-gated the dog sled race (awesome!). On the tailgate of their pickup truck they had campstoves with gumbo and chili and they also had pie, rice crispy treats, chips, and beer. They were having a great time and asked a lot of great questions. They offered me food before my race but I declined as I planned on running A LOT with my team. But as soon as I was back to the truck and had water to my dogs, they came over with all sorts of food for me! 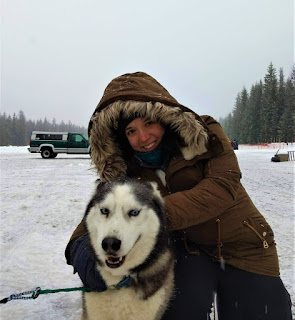 Finally our race time came. The dogs were lined out, led to the chute (where Jig about peed her pants due to the number of spectators) and we wert off. They were fast and ready to run. 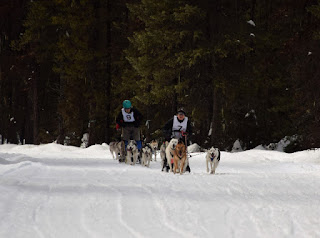 About 1.5 miles down the trail we caught Kim and Nonna’s teams. It was narrow but we passed. They hung tight to us for another two miles where my team had to stop multiple times for bathroom breaks. We were passed, then we re-passed but Nonna’s team finally passed us again and I decided to hold the team back and follow into the finish. Once the times were posted I was surprised to find we were in 2nd!!!! One minute 8 seconds behind Dan Hanks’ hound team (very big deal). Especially given the warm temperatures, that was an amazing run for my team. 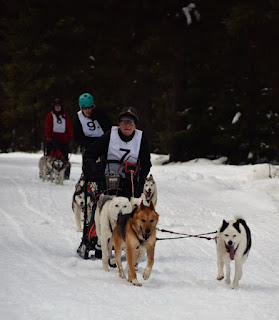 That evening we had dinner with the race organizers at the Elkins restaurant and had a great time sharing stories and laughs. The next morning, I managed to stay calm and focused. We had a good lead on 3rd place so as long as we had a clean, smooth run, we should be able to hang on to 2nd. Day 2 was cooler and, Superbowl Sunday, so we did not expect as many spectators but I still decided to switch Jig out of lead for Buck, give her a break from the major stress and let her just run. This was a hood decision as the team ran faster. They started us in order of fastest to slowest and we did not encounter anyone on the trail for day 2. After two days of racing the team finished in 2nd running the combined 9.4 miles in under 1 hr (52 min 22 sec).

Super impressed with these dogs. We had so much fun! 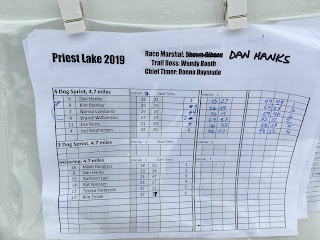 The drive back was stressful as a large storm system had moved in. By Thompson Falls, the temperature was 20F with strong winds. All the wet gear and trailer parts had frozen. It took us 20 minutes to free the dogs from their boxes, after breaking and cutting away ice. I am very thankful to Valentina and Stefano for accompanying me. It made a very stressful drive easier and more entertaining, especially our 2 hilarious and fun hours of playing 20 questions. 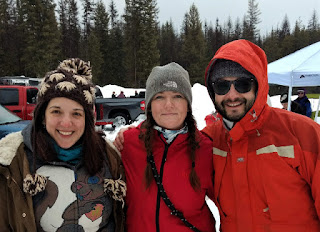 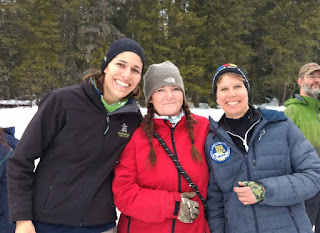 Posted by Brandi Williamson at 10:08 PM No comments: